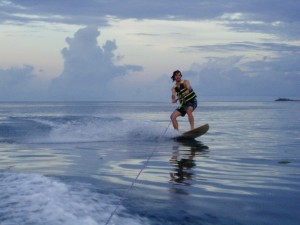 Skurfing was thought up probably as an offshoot from surfing games like water skiing and mono skiing. In its early phase, the surfers were first towed into the sea by a boat to face the high waves. Then, many innovations were carried on to make surf board more suitable for skurfing. Its length was shortened and some surf boards even had the fins removed. Skurfing is also called as wakeboarding. The credit of making this water activity popular goes to Tony Finn, who made and sold the Skurfer.

The difference between wakeboarding and surfing sports is that the shorter board and shorter tow rope is being used in skurfing; the fins are also removed in wakeboarding. The rider is towed by a motorboat and he doesn’t have to use his own power and energy to propel himself. A rider in skurfing never goes out to meet the big one. On the other hand in skiing, the water skier uses two flat and narrow boards strapped to his feet. He holds in his hands a ski line. A very fast speedboat will then pull him out of the shallow water. The momentum of the boat keeps the skier afloat while skimming the surface of the water.

The costs involved in skurfing are the board, renting a boat, and other accessories such as surfing shorts, eyewear, and sun block. In cold weather, a wet suit is required to reserve body heat. The average total cost comes to be around 800 Dollars. However, if you wish to take lessons on wakeboarding, it will coast you an additional sum of 50 dollars or see our website for more.

Skurfing is a hugely popular water sports in Australia, especially in Western Australia. It’s also getting popular day by day in many other places in the world. The difference between skiing and other water sports is that skurfing is not a professional sport and has no official competitions yet; it is a freestyle sport with highly individualistic style and form. There are no defined styles or conventions rather it is about personal style.

Skurfing has two main styles which are the nose riding style, which is mainly practiced by people who surf on a long board. The other one is with cutbacks, carves and other turns. Some surfers even get air over the wake. In the recent tines, a new style of skurfing has emerged in which the fins are removed from the bottom of the board. This is called as the finless style. It requires more balance and finesse than having the fins attached. It allows the rider to spin the board around in a 360-degree rotation.